Hondurans Arrested in Panama with Over 7 Million in Cash

January 13, 2014 by Jennifer Catracha No Comments

Three Hondurans were arrested in Panama for transporting over seven million unclaimed dollars in their suitcases. 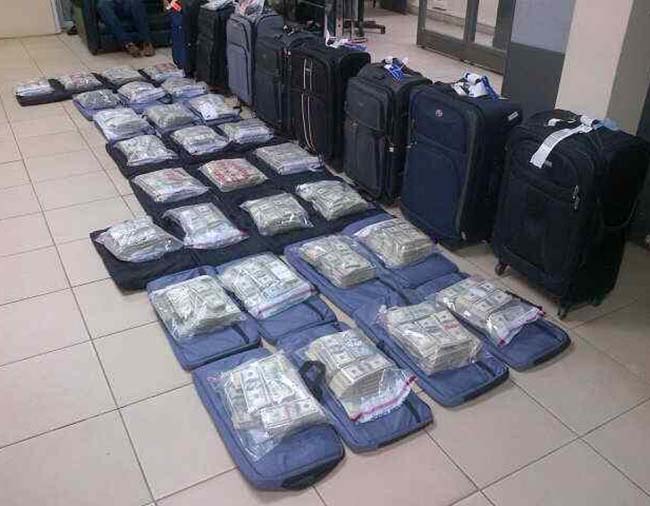 Cash Found in Suitcases of Hondurans Traveling to Panama from Toncontin International Airport.

The Panamanian legislature allows for the confiscation of all money above 10 thousand dollars that is not declared by a passenger at the time of entering the country. Over seven million U.S. dollars were found stashed in false bottoms of suitcases belonging to Hondurans Melvin Omar Calderón Tábora, Ramón Arturo Muñoz Umanzor, and Hugo Mauricio Galdámez, according to Panamanian authorities.

The Honduran police have begun an extensive investigation to determine the origin of the money, as well as who the accomplices were that allowed the men to leave the country on Saturday through Toncontin airport in Tegucigalpa.

According to the head of the National Directorate of Criminal Investigation (DNIC – Dirección Nacional de Investigación Criminal), Leandro Osorio, the three Honduran prisoners in Panama left from Honduras’s Toncontin International Airport, and so investigations are being made in order to determine who is responsible for the detainees being allowed to travel.

“A preliminary investigation is starting up; already we have two teams who are conducting field investigations.” said Commissioner Osorio. “We are going to use the electronic intelligence from their cell phones to see where they came up with that money.”

The money seized in Panama City was transported via Copa Airlines flight 425, which departed from Tegucigalpa. The Toncontin airport passenger control staff did not detect the money, despite the use of sophisticated X-ray machines.