President Porfirio Lobo has sworn in lawyer Miriam Estela Guzmán Bonilla as the new head of the Directorate of Revenue (DEI – Dirección Ejecutiva de Ingresos) to replace Mario Lopez who retired from office due to health problems. 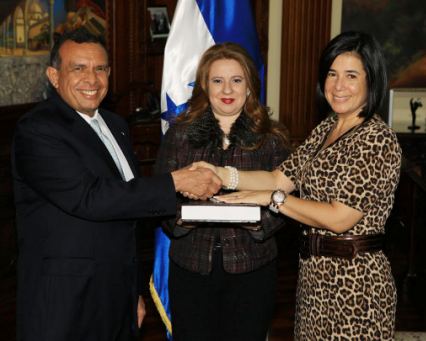 New Director of Honduras DEI Miriam Guzman (right) was sworn in by President Lobo, with the Deputy Minister of Finance, Evelyn Bautista as witness.

The official takes office at the request of President-elect Juan Orlando Hernández.  Guzman is the first officer who is listed in the new administration of the President-elect of Honduras, Juan Orlando  Hernández, and expressed that the effectiveness of the new government will depend on the efficient collection of taxes, and believes that the current DEI must undergo a change.

The announcement was made by  Hernández, who thanked President Porfirio Lobo Sosa for Guzman’s appointment, “I appreciate the openness of President Lobo to name the new Director of the DEI”.

According to Guzman, “We have to do a complete re-engineering; the DEI cannot continue to operate the way it has, because it has not produced the expected results.”

The new Director will begin with performance evaluations of the current DEI employees, as well as the implementation of confidence tests to determine if staff is honest and committed to the institution.

She stated that she has no political or private commitments other than to God, the country, and the new president. “To be blunt, I take this responsibility without any commitment to anybody,” she said.

The issue of improving tax collection is urgent, according to the new official; however, it will take some time to make a complete overhaul of an institution that has been collapsed for several years.

According to the President-elect Juan Orlando Hernández, Miriam Guzman will be working with a group called the “National Anti-Corruption Force, which is an intelligence team that would investigate officials and businessmen who collude to evade the IRS,” revealed Hernández.  Hernández further noted that he asked the country’s intelligence chief, General Julián Pacheco, to initiate the investigation into those officials and businessmen.

Hernández added that this next government will make a fair and functional readjustment of various institutions.

After his return from his tour of the United States, the President-elect said that his government will have a small and austere cabinet  that will be effective in meeting the goals promised in his campaign, “Our commitment is to have an austere, simple, and small, but effective government.”