Honduras Expects an Over Supply of Sweet Potatoes 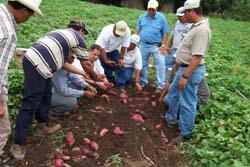 “We currently have about 150 hectares devoted to the production of different varieties of sweet potato. In recent years demand has increased and we have improved our quality standards and productivity, according to GlobalGAP standards,” states Óscar Castellanos, Quality Assurance Manager of the company Tropical Fresh.

Tropical Fresh, one of the first to export sweet potatoes from Honduras to Europe and Canada, is committed to producing this nutritious vegetable throughout the year, while working on the introduction of Butternut squash.
“Prices in 2014 were really good between May and August, as sweet potato production in the United States, Europe’s largest supplier, was very small. This year prices are expected to be low because of oversupply,” affirms Nevio Castellanos, manager and owner of the company.
Niche markets and sustainable production 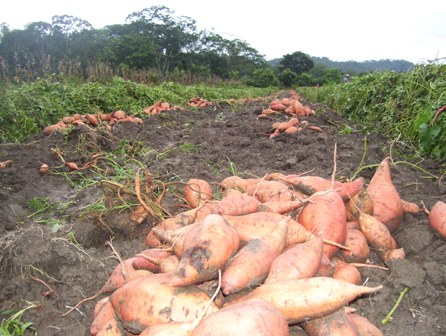 The Honduran sweet potato is well Known for their excellent flavor an quality.

“We have been in the market for several years and have always managed to remain competitive; the decline in prices forces us to be more efficient and to mechanise the planting and harvesting processes. We are also planting more productive varieties, such as the Blesbok (red variety with white peel) and Beauregard (orange),” affirms Nevio.
According to Nevio, sweet potatoes have several niche markets, depending on their colour. Orange is intended for British or North American consumers, and the red with white peel for Asian consumers living in Europe or Canada, where it is considered an exotic.
Sweet potato production in Honduras, while not reaching the productivity rates of the U.S., because it is less mechanised, generates ten jobs per hectare, giving it great social importance.
Nevio points out: “Our company exemplifies a new generation of agro-businesses in Honduras, which rely on a flourishing future for the sector and the communities, based on sustainability.”
“During its ten year history, Tropical Fresh has always sought to establish long-term partnerships with its clients, based on honesty, respect and trust. We are in a process of continuous improvement and this year we want to increase our penetration in the northern European market,” concludes Nevio.
Tropical Fresh will be present again at Fruit Logistica in Berlin and can be visited in Hall 23, Stand D-04.
Background from USAID

Sweet Potatoes From Honduras Find New Markets
The sweet potato is a profitable alternative for small farmers. Production costs are low, and it has a four-month production cycle that enables growers to produce at least two crops a year.

Small farmers in Honduras have traditionally planted corn, beans and coffee, mostly for subsistence. Any surplus was sold on the local market, earning small profits. With the possible ratification of international trade agreements, Honduran small farmers need to become more competitive to remain viable and profitable in the global marketplace. And while sweet potatoes were traditionally grown in small volumes for the local market, farmers did not have international networks or the expertise to produce a high-quality crop.

Since 2000, USAID has supported Honduran small farmers by providing assistance in marketing, post harvest handling, production, processing and technology. In sweet potatoes, USAID saw an opportunity for small growers to take advantage of the potential for export to nontraditional markets. USAID identified buyers in the Netherlands and Canada and began working with a group of small farmers, including Enrique López, from San Antonio in northern Honduras. Enrique used to grow coffee, but his land was not well suited for it, and he sold it at low prices. USAID helped Enrique diversify production and access new markets. After learning new technologies like drip irrigation and crop scheduling, Enrique planted 3.2 acres of sweet potato and obtained his first harvest in July 2004.

During his first year of planting sweet potato, Enrique’s profits increased by more than 60 percent. His produce was of such high quality that USAID helped him sign a contract with an exporter to plant 2.4 acres every two months. By September 2004, 45 small growers had joined the sweet potato program and 520,000 pounds had been shipped to Europe. Each grower makes an average of $1,350 per hectare in profits, and the program has generated 150 new jobs. The program is set to expand in 2005 to provide opportunities to even more Honduran farmers.