The men accused of leading a major Central American drug trafficking gang and labeled as “Drug Kingpin” by the Obama administration have been extradited to the United States by Honduras, a Honduran government official said on Thursday. 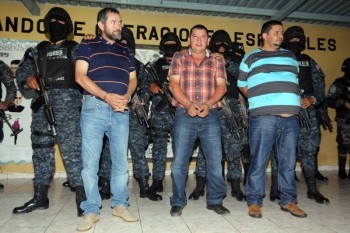 Miguel Arnulfo Valle, who has been described by the U.S. government as head of the Valles cartel, was flown on a private plane to Fort Lauderdale, Florida, along with his brother Luis Alonso, Honduran security minister Arturo Corrales said.

The U.S. Office of Foreign Assets Control has said the Valles cartel, which is based in western Honduras along the border with Guatemala, is responsible for violence, corrupting public officials, and distributing tens of thousands of kilograms of cocaine each month to the United States.
The United States has requested the extradition of more than a dozen Hondurans accused of being drug traffickers.

Security officials have said the Valles cartel has ties with the Sinaloa cartel, one of Mexico’s most powerful gangs. The Sinaloa cartel was long controlled by drug lord Joaquin “Shorty” Guzman, who was captured last February.

Drug-related violence in Honduras has increased since Mexico’s drug cartels expanded into the country, enlisting local street gangs and using its Caribbean coast to transport South American cocaine to the United States.