Honduran president José Orlando Hernández signed an anti-corruption and accountability mission into existence Tuesday at the Organization of American States, months after its initial announcement in September. 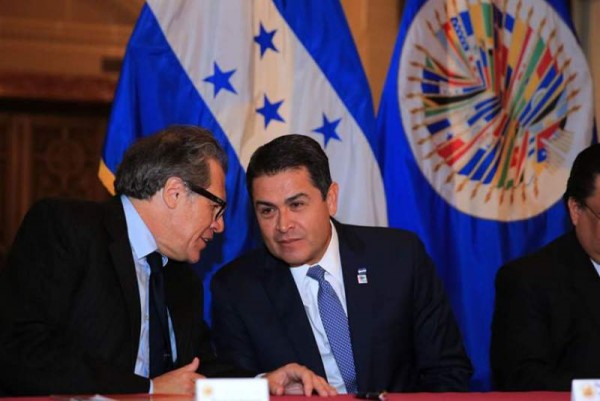 The Organisation of American States (OAS), announce plans to set up a Support Mission Against Corruption and Impunity (MACCIH) in Honduras

The mission, called MACCIH for its Spanish initials, was announced after public outcry for accountability following a major corruption scandal within the Honduran Social Security Institute that led to the loss of over $200 million and the collapse of several public hospitals. The institute oversees medical care and pensions for Honduran workers.

After signing the agreement, Hernandez said the MACCIH, led by Peru’s former prime minister Juan Jimenez Mayor, will have

to Honduran institutions. Within the MACCIH, a group of international judges and attorneys will work to “end impunity in corruption cases, fortify the government and sanction acts of corruption,” Hernandez said.

Honduras ranks 125 out of 174 countries in Transparency International’s Corruption Perception Index, as well as first in the World Bank’s ranking for intentional homicides per capita. However, Hernandez said Honduras is going through a process of change.

He said that, although crime and corruption had increased dramatically in the past decade, open investigations and prosecution had remained stagnant.

Also present at the ceremony was Luis Almagro Lemes, OAS secretary general. He said the organization believes the MACCIH is the opportunity Honduras needs to establish an accountability mechanism and reduce corruption both within the government and the private sector. In the audience were most of the OAS ambassadors.

Other similar missions, such as the International Commission Against Impunity in Guatemala (CICIG), have had success in sanctioning corruption networks. The CICIG was instrumental in the investigation that led to the arrest of former Guatemalan president Otto Pérez Molina in 2015.

However, a common fear is that the MACCIH will not have the desired impact. Though it will be funded by the OAS and international donors, it will receive only about $2 million a year, while the UN-backed CICIG receives approximately $12 million.

Eric Olson, from the Woodrow Wilson Center’s Latin America Program, said that if the mission is denied sufficient autonomy, or if its leader lacks political will, the MACCIH could turn out be just another wasted opportunity for reform, making both the Honduran government and the OAS look bad.