In the past ten months, from October of last year to date, 50,000 people in Honduras have been infected with the chikungunya virus, but it could have been many more without the preventative work done so far, according to Authorities of the Ministry of Health of Honduras.  If the population is not made more aware of the risk, however, it is predicted that cases of chikungunya in our country could reach 200,000 by the end of the year.

Mosquitoes become infected when they feed on a person already infected with the chikungunya virus. Infected mosquitoes can then spread the virus to other people through bites.

The lack of a large scale awareness campaign, combined with few resources to combat the virus, could lead to higher incidents of chickungunya in August due to an expected increase in rainfall.

Deputy Health Minister, Francis Contreras, said the best way to combat chikungunya, and dengue for that matter, is to destroy mosquito breeding sites.

“It’s a combined work that has to be done together, the people and us authorities, in order to control it and ensure this disease does not spread,” he said. “July and August are the peak months.  Because there is no cure for this disease, the only thing left is to treat and counter it with the measures we are taking.”

People should walk the areas around their homes and gathering places in search of standing water, and eliminate it. 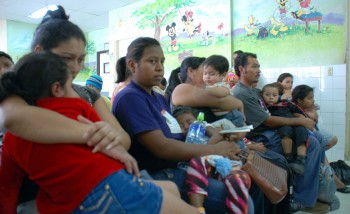 Children and the elderly are most at risk for the virus.

The concerned official explained that in El Salvador, in three months, they experienced more than 200,000 cases, and in six months, in the Dominican Republic, more than a million cases were recorded.

Contreras said the solution is not to eradicate the mosquitoes through fumigation as people think, but by destroying the sources, to remove the larvae, so there are no new mosquitoes.

The same is true for dengue.

“We live in a tropical country and, therefore, neglect on the part of the population can cause the disease to get out of hand for the health authorities,” according to the President of the Medical College of Honduras, Elmer Mayes.

People can also protect themselves by preventing mosquito bites. Use insect repellent, wear long sleeves and pants, and stay in places with air conditioning, or that use window and door screens.