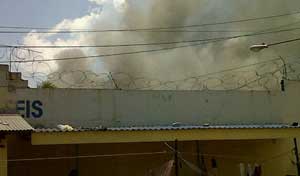 A mutiny of inmates this morning resulted in a shootout and fire inside the San Pedro Sula downtown prison.

The Red Cross and police quickly mounted a strong safety operation on the outskirts of the facility, to treat any injured.

Authorities lost control of the prison during a shoot out, and police sources say that prisoners have submitted a list of demands to be met, before they will return the prison to the authorities.

Pompeyo Bonilla, the Honduran Minister of Security, carried out a quick inspection, but left the prison area without giving statements.

Firefighters contained the fire that allegedly occurred in the prison bakery, but ultimately had to leave due to prisoner threats.

According to preliminary information, the fight broke out when a beheaded body was found inside the cell of a non-gang-related inmate. It was determined that the body was one of the coordinators of the non-gang-related group of prisoners.

Information on any dead has not been confirmed.

One injured person, who was identified as Félix Antonio Cruz, was taken by ambulance to the Mario Rivas Hospital. He suffered a gunshot to his neck. A woman visitor was also tended to by firefighters on the spot.

The criminal center in San Pedro Sula houses 1,800 prisoners, although it was built to only contain 800.