The First Lady, Rosa Elena Wolf, the Presidential Minister, María Antonieta Guillén, and the President of the Supreme Court of Justice, Jorge Rivera Avilés, yesterday inaugurated the Gender Unit of the Judiciary, whose principal activity will be incorporating a cross-gender perspective on planning and management of the State. 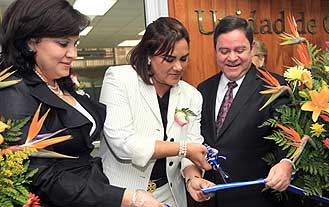 “My presence at this solemn ceremony is a show of support for what has been done within the judiciary to strengthen the unity of the genders, which represents a breakthrough both for women and the image of our country before the world,” said the First Lady.

The incorporation of this approach to justice services, aims to provide a more relevant part of monitoring new commitments that have been made in the statements of the meetings of judges and justices of the highest courts of America.

The President’s wife expressed her joy at the opening of the Gender Unit, as it will contribute positively to the eradication of misconduct, so Hondurans can enjoy an authentic justice, regardless of gender.

Attorney Ingrid Vivian Linck, coordinator of the Gender Unit of the Judiciary, said she assumes the challenge of leading the drive to ensure a level of equality of justice, to reach those in need.

Also in attendance were the wife of the President of Congress, Ana Rosalinda Hernandez, Minister of the National Women’s Institute (INAM), María Antonieta Fernandez Botto and the Minister of Justice and Human Rights, Ana Pineda.

The new Gender Unit was blessed by Father Roberto Paiz Castillo, while the First Lady Rosa Elena Wolf and the President of the Supreme Court, Jorge Rivera Avilés, cut the official ribbon.