Lloyd Davidson has always been prone to wanderlust and wild ideas, but even those who know the Tennessee native could never have predicted he’d be the best hope to save the scarlet macaw.

By the time he was in the ninth grade, Lloyd Davidson knew he wanted no ordinary life. For starters, he asked his parents if he could attend McCallie School, a private boarding academy in Chattanooga—a military school at the time—pretty much for the fun of it. The travel bug bit hard in the summer of 1959, when he signed on for a free-diving camp in Tobago, which back then might as well have been Mars. “That summer screwed me for life,” Davidson says, in a low, gravelly Knoxville drawl. Davidson is a Steve McQueen look-alike, lanky and fit for a fifty-year-old, all the more impressive since he just turned seventy. “I can trace every abnormal thing I’ve ever done to that experience.”

So it wasn’t much of a surprise when Davidson took a year off from prestigious Davidson College to sail around the world after answering an advertisement in the back of National Geographic. And no one was shocked, either, when he joined the Coast Guard and spent half of his four-year stint as a diving officer on a polar icebreaker. That was just Lloyd being Lloyd. Same for a second round-the-world sailing venture, after which he wound up in Beaufort, North Carolina, working at the University of North Carolina Marine Laboratory and boning up for graduate-school exams. That didn’t last. He spent the next twelve years as a commercial fisherman off North Carolina’s Cape Lookout and Cape Hatteras. In 1984 Davidson caught a 2,080-pound great white shark, hauled it to the North Carolina State Fair, and charged admission until it started stinking so badly he decided it was time to leave. Even when Davidson moved to Roatán in 1986, a small island off the coast of Honduras, to start a fish export business from scratch, supplying snapper and grouper to East Coast restaurants—a company he ran until drug lords shouldered him aside—his closest friends were hardly surprised. 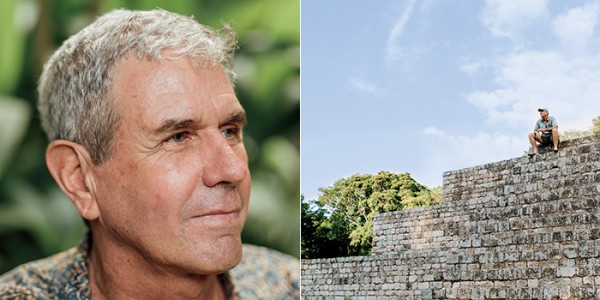 But in his many wild dreams, Davidson could not have imagined this.

The scarlet macaw is one of the world’s largest parrots, a nearly three-foot-long, overly exuberant, wildly colored embodiment of pirate ships, Jimmy Buffett, and tropical paradise. The birds were once found from Mexico to Peru, but populations have been exterminated across vast swaths of their range. They’re gone from most of Mexico and nearly extinct in El Salvador, and they exist in only isolated pockets throughout much of Central America. Guatemala and Belize share a few hundred. Costa Rica has about a thousand. 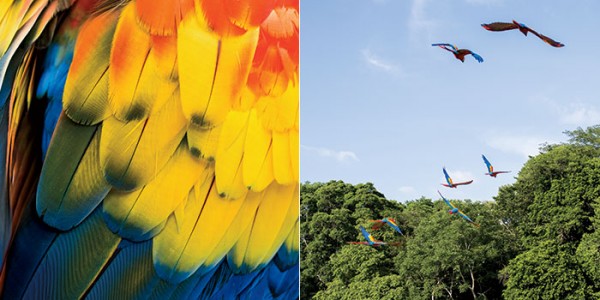 In Honduras, which designated the scarlet macaw its national bird nearly twenty-five years ago, the parrots are found in the wild only on the far eastern border with Nicaragua, where the tangled million-acre-plus La Mosquitia wilderness shelters a few indigenous villages and perhaps the most active drug-smuggling routes in all of Central America. Poaching for wild scarlet macaw chicks there—the adults can bring two thousand dollars in the illegal pet trade in the United States—is rampant.

Whatever hope there is for restoring the birds to the rest of Honduras is found in a lush, manicured nine-acre compound of mature forest just outside of Copán Ruinas, a cobblestoned village high in the mountains on the border of Guatemala. His Macaw Mountain Bird Park & Nature Reserve, which Davidson founded fifteen years ago, is a sanctuary for abandoned pet macaws and other native parrots and parakeets. Most have been so long in captivity or so long abused, or both, that they could never make it in the wild. Others were injured and then tossed aside by poachers. But in addition to running the park as a rescue, public education, and tourism enterprise, Davidson and his staff are breeding scarlet macaws and releasing the young into a valley marked by some of the finest Mayan ruins in all of Central America. When he arrived in Copán, about fifteen sick and flightless half-feral macaws rambled around the entrance to the Copán ruins, living off of chips and leftover tortillas tossed by visitors. But in the last four years, those birds have been nursed back to health. More than fifteen other scarlet macaws have been captive-bred. Today, nearly three dozen scarlet macaws fly wild in the Copán valley, and Davidson is now working to develop other release sites in Honduras, including the Lodge at Pico Bonito on the border of the second-largest national park in the country, and a secure island off the coast where twenty-two scarlet macaws were released and have begun to raise young.

“Five years ago, had you asked me if this kind of project would work, I would have told you that you’d lost your mind,” says Dr. James Gilardi, executive director of the World Parrot Trust, which partnered with Macaw Mountain to bring scientific process to what Davidson admits can be his penchant for wild schemes. “But the fact is, while we pointy-headed scientists turn circles trying to figure out what to do, this commercial fisherman, this Southern good ol’ boy, comes down here and gets the work done.” 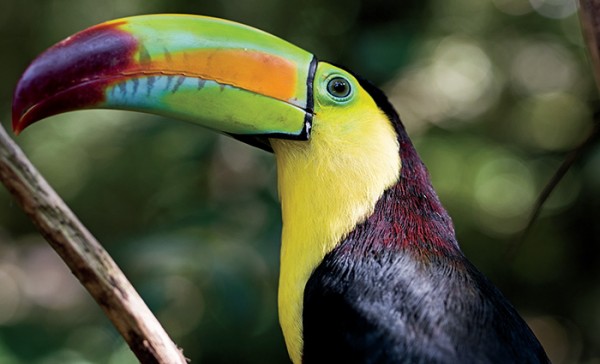 It’s difficult to pin down when it all really started. Davidson first visited Roatán when his old diving buddies were trying to build a small resort business there and asked for help. “I got my Coast Guard discharge papers,” he says, “dumped my uniforms in a Goodwill box, and forty-eight hours later I was in Roatán.” Not long after moving down permanently to start his Flying Fish export operation, he adopted a pair of scarlet macaws left in the lurch when a Roatán resort went belly up. With an expat friend, Davidson began taking in macaws from neighbors and locals disenchanted with a spaniel-size bird that can cop a surly attitude and live for more than seventy-five years in a living-room cage. “People get to paradise,” he quips, “and the first thing they think they have to have is a parrot. But within a couple of years they’ve had it with the bird or with paradise itself. Either way, we’d end up with the birds.”

This accidental aviary grew to nearly forty birds when his friend moved off the island in 1994, and Davidson inherited the whole shebang. Still the birds kept coming—a Noah’s ark of scarlet and great green macaws, mostly, but also red-throated parrots, various and sundry parakeets, the odd tropical owl. He became known as the Birdman of Roatán. He built a small bird park that catered to island divers and the occasional tourist. His bird numbers more than doubled.

Roatán was changing, too. Once a funky backwater, the island had become a posh diving destination and a favorite of cruise ships. Davidson’s day job was no walk in the park, either. Through the mid-1990s the fishing industry was being squeezed by drug traffickers who wanted a piece of the action. Davidson wasn’t stupid; it was time to go. In 2000 he bought Finca Miramundo, a coffee plantation in the stunning mountains above Copán, a UNESCO World Heritage Site that contains some of the finest Mayan ruins in all of Central America. He locked down land for his menagerie. In the summer of 2002, he left Roatán for good. He chartered a twin-engine airplane, removed the seats, and filled the passenger bay with birdcages. When the plane settled down on a dirt strip in Guatemala, close to the Honduran border, two things weighed heavily on his mind: This coffee business had better take off pronto. And he sure hoped he’d made the right decision for his birds. After all, there were ninety of them looking out the plane’s passenger windows.

Honduras has its baggage, there’s no denying that. Its reputation for crime is well documented. Per capita income is $2,280; in Central America, only its neighbor Nicaragua is poorer. The 2009 coup that ousted President Manuel Zelaya sent the national economy—and tourism especially—into a tailspin. It has never fully recovered, despite improving crime statistics, despite a growing reputation for ecotourism that is drawing larger and larger numbers of Europeans, despite the safety of vacation destinations such as Roatán and Copán. 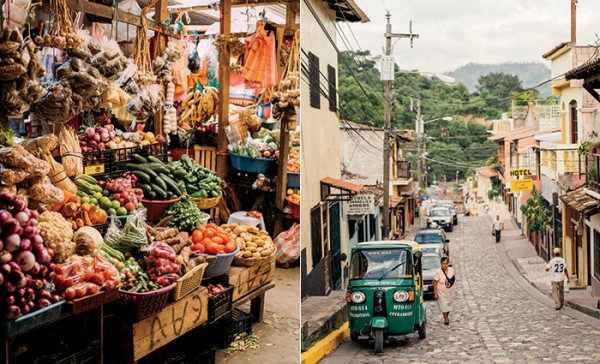 For Davidson, it’s as much like the South as anyplace he’s been. “Squint your eyes and don’t look at the palm trees,” he says, “and it’s pretty much the same setup as East Tennessee.” Creeks tumble through heavily forested valleys, the skyline crenellated with green mountains. “I was here maybe two years when I looked up one day and said, wait a minute. This is like home. I even dammed a swimming hole in the creek, because that’s what we rednecks do.”

But it’s as much about attitude as geography. The horses tied to the rough railings on the outskirts of town—Davidson remembers that from rural East Tennessee. Kids still swim in the rivers here, too. Generations mix, and family gatherings matter. Davidson even bought the land for the bird park on a handshake deal. The landowner was a tall man in a cowboy hat, “the kind who looked you straight in the eye,” he recalls. When Davidson asked for a contract, the Copáneco stuck out his hand. “At the time I thought I was the craziest gringo in Honduras,” Davidson says, “but I told him: ‘Where I’m from, we still do things like this.’”

Honduras is also a place “where you can get shit done,” Davidson says, his language salted with a waterman’s patois, “as long as you don’t piss too many people off or do anything that really freaks out the authorities.” Within a month of kicking off construction of the macaw restoration effort, he had two government agencies, a nonprofit NGO, and a private enterprise signed on to support the bird park.

Now the bird park has evolved into a can’t-miss Copán attraction. When I visit with my daughter, a school group had toured the park earlier in the day, but we share the compound with just a few local families and a handful of tourists. Our guided walking tour takes about an hour and a half, and wanders along carefully built boardwalks that tunnel under natural forest—cedars and mahoganies and red-barked jobo trees whose branches sag under orchids and bromeliads. Around each walkway bend lies a soaring aviary, constructed of black netting, mostly, and housing an astonishing array of tropical birds. There are scarlet macaws, of course, but also orange-fronted and red-throated parakeets, red-lored Amazon parrots, keel-billed toucans, and mottled owls. Wild motmots call along the creek that flows through the property. Staff occasionally hear ferruginous owls calling overhead—four tiny young were recently released from a captive pair. Cinnamon hummingbirds flit through dense gardens of hyacinth and wild ginger.