The President of Honduras, Porfirio Lobo Sosa, and the President of the United States of America, Barack Obama, held a historic and fruitful bilateral meeting, which addressed issues of interest to both nations.

The meeting began at 1:45 pm (ET Honduras) and lasted over an hour in the Oval Office of the White House. Obama reaffirmed his commitment to increase aid to Honduras and Central America. 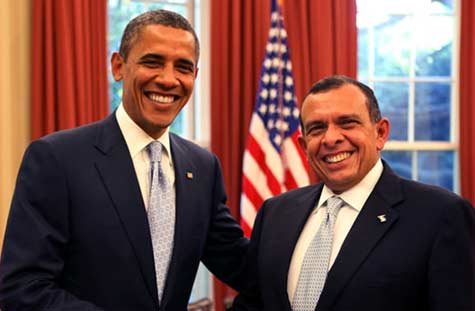 “President Lobo, this becomes an opportunity to reaffirm the ties between the people of Honduras and the United States,” said the U.S. President, who acknowledged that the work of the Honduran community living on U.S. soil has been a factor for growth.

” … because of the strong commitment to democracy and leadership by President Lobo, what we’ve been seeing is a restoration of democratic practices and a commitment to reconciliation that gives us great hope.”

“And President Lobo’s leadership is responsible not only for helping to restore constitutional order and democracy and a commitment to fair and free elections, but it’s also allowed Honduras once again to rejoin the Organization of American States, and for Hondurans – the Honduran relationship with its neighbors to be restored to a normal place.”

“Of course, much work remains to be done. And I’m looking forward to an excellent conversation with President Lobo about how we can be helpful in ensuring that human rights are observed in Honduras. We will discuss ways in which our two countries can work effectively together to deal with the security situation that exists not only in Honduras but through Central America, and how we can cooperate effectively in preventing the countries of Central America from being corrupted and overrun by the transnational drug trade. And we also will have discussions about how we can continue to strengthen development in Honduras and the region so that people have opportunity, we will see economic growth, see economic development, and expand trade and further interactions between our two countries.”

President Lobo Sosa said he was very honored to be in the White House, reaffirming the friendship, and thanked President Obama for the continued support from the U.S. in areas where the benefit is for the majority.

“It was a very productive day; Obama expressed interest and offered to support us fully in matters having to do with strengthening our justice, police and armed forces,” he said.

He said he is confident that with the support of friendly governments, such as the Obama administration, Honduras will continue to fight against the enemies of drug trafficking and organized crime, which only cause grief and pain to the people.

“I want to say that we respect human rights, and as a State Government is our policy to respect the human person; we have some weaknesses, such as research on that topic, but hope to have more help from their government,” he said.

“In Honduras, Mr. President, next year are the primary elections … the general elections are in 2013, so we are still in the process of strengthening democracy in our country,” he added.

Finally, the President of Honduras praised, that in times of crisis, that the U.S. assistance has been crucial to help achieve the reconciliation process among the Honduran family.