Over 8,000 citrus plants will be certified in Honduras

The Buena Vista nursery, located in an area that bears the same name, at the top of El Merendon mountain which is the “lung” overlooking the Sula Valley; (San Pedro Sula) will become the second nursery in the country that has be certified as free of citrus plants pest, which will benefit more than 300 producers. 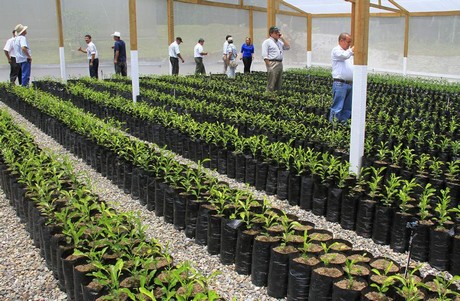 8,000 Honduran citrus plants will be certified. The Buena Vista nursery, located in an area that bears the same name, at the top of El Merendon mountain

Officials of the Aguas de San Pedro Company (ASP) formalized procedures to certify 8,000 citrus plants that will add up to 40,000 plants a year in 175 blocks.

The goal is to prevent the Huanglongbing (HLB) disease, discovered in 2009, from finishing with the production in El Merendon.

The concessionaire will become the first private company to certify its trees and the second facility in the country to get certification; the first one was the Regional University Centre of the Atlantic Coast (Curla).

The disease has destroyed 7,000 citrus plants throughout the country; producers in El Merendón say that a significant number of trees have been uprooted for this cause.

Honduras has about 23,000 acres of citrus. Of these, 10% corresponds to the cultivation of lemon, which is sold abroad at good prices.

“Last year, the lemon export cycle amounted to nearly $100,000 per container in the state of Florida, United States. Prices were very flattering as they were competing strongly with high-yield crops like okra,” said Edgar Santamaría, deputy director of SENASA.

Since its discovery six years ago, Santamaria said, this pest has caused havoc in citrus groves. Fortunately, it has been controlled; however, it is beginning to cause commercial harm, he said.

There is no cure for this plague that can be identified by the irregular discolouration of the plants’ leaves and that won’t let the fruits ripen normally. It is controlled by spraying the vector that transmits the infection to healthy plants, eliminating the infected plants and planting new ones.

Claudia Enamorado, head of the control process at Aguas de San Pedro, said that, after they were certified, the plants would be delivered free of charge to the farmers so they could plant them in their land and continue trading. ASP’s goal continues to be the planting of one million trees in the mountains to conserve water.

The company expects they will reach the half a million mark this year. “Since the disease was discovered, Oirsa and SENASA have coordinated actions in Colon and Atlantida, where most of the citrus is concentrated”. Now they are focusing on Yoro and El Merendón, which has considerable potential, she stated.