How Politics and Business Unite in the U.S., Honduras and Israel

This week, U.S. President Barack Obama is meeting with Israeli Prime Minister Benjamin Netanyahu for the first time since the U.S. signed a deal with Iran. 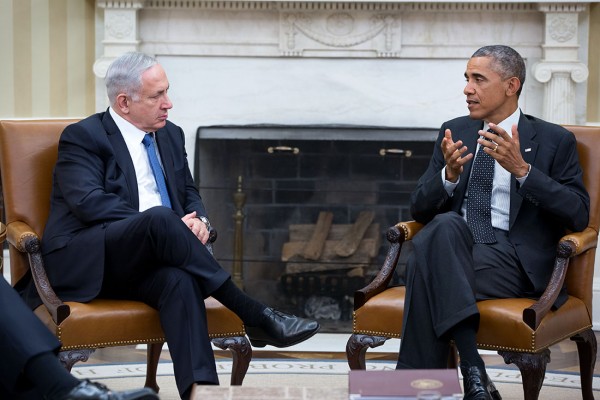 Two weeks ago, Honduran President Juan Orlando Hernandez traveled to Israel to meet with Netanyahu. The timing of these meetings is no coincidence.

PM Netanyahu with Honduras President Juan Orlando Hernández
The timing of these meetings is no coincidence.
Photo Courtesy: mfa.gov.il

Both Hernandez and Netanyahu are in the throes of popular uprisings against the tyranny and corruption of their regimes. Indigenous peoples, working peoples and social and economic justice activists in Honduras and Palestine are taking to the streets and exercising their rights and duties to resist domination and dispossession.

Behind the authoritarian regimes is the government, corporate and banking milieus of the U.S. government, also currently experiencing its own version of popular uprising. By focusing on the relationship between Honduras and Israel, one can locate the role of U.S. foreign and trade policy in repressing democracy abroad and at home and the impact it has on the Earth and her peoples.

The proliferation of neo-liberal policies in Latin America has been coordinated through American emissaries of the U.S. and Israeli-backed military-industrial complexes. For decades, U.S. free trade agreements with Israel—including the very first Free Trade Area Agreement the U.S. ever signed with another country signed in 1985—have provided Israel with billions of dollars a year in “humanitarian” and “security” assistance while also guaranteeing Israeli “ownership” over any technologies it develops. These technologies have been tested and employed against Palestinians in the West Bank and Gaza.

Indeed, Israel uses the “success” of its weaponry against the Palestinians in regularly timed operations to tout its effectiveness. The U.S. funds this technological development and then also permits Israel exclusive rights to this technology, which it then purchases from Israel, as it did with airport x-ray machines developed by Elbit for Tel Aviv’s Ben Gurion airport and used at various checkpoints between Israel and Gaza. This technology also includes weaponry, tactics and even methods of detention and interrogation tested on Palestinians and then passed on to the U.S. through trainings and alliances between Israeli and U.S. police forces. No other country has been granted the sweeping entitlements to technology rights that Israel enjoys with the U.S.

In the highly concentrated and densely populated urban areas of Israel and the West Bank and Gaza, Israel has had ample opportunity to refine its methods thanks to U.S. financial and political support, and the U.S. reaps the rewards of this “strategic relationship” by being able to adopt practices and techniques developed and tested in the field. By justifying Israel’s use of extreme methods and tactics abroad, the U.S. is able to set the tone for a cultural acceptance of ever-increasing levels of militarization under the auspices of race-based threats to security. This “strategy” creates ripe conditions for suppressing resistance movements at home while encouraging the complacency of populations under siege and those who might otherwise unite and resist with them.

Meanwhile, the U.S. and Honduras are negotiating the terms of the Alliance for Prosperity for the Northern Triangle (which includes Honduras, El Salvador and Guatemala) as Honduran civil society increasingly joins the long-standing resistance movements in fighting the oppression of the government and oligarchical family networks that devastate communities and occupy indigenous lands.

The people’s dispossession of land and resources corresponds to the rise in industrial zones that provide subpar wages and destructive social values in Honduras, just as it does in so-called “industrial zones” in Gaza and the West Bank. These zones are supported by U.S. financial interests and “secured” with tactics and weaponry developed in coordination with the U.S. military industrial complex, including the Western Hemisphere Institute for Security Cooperation (WHINSEC) and various private security companies responsible for the construction and maintenance of prisons and detention facilities in the U.S. like G4S. WHINSEC is a clandestine training facility for military personnel in other countries, including Latin America, formerly known as the School of the Americas (SOA); G4S is a U.S.-based international private security company that is responsible for administering prisons in Israel, the U.S and Honduras.

Access to natural resources is also a paramount aspect of the situations confronting both Honduras and Israel. In 1993, Honduras passed the Law of Modernization of Agriculture, which allowed the government to commandeer public lands to develop hydroelectric and mining industries by private interests. Today, more than 35 percent of all public lands in Honduras have been appropriated in this manner, including several water sources that once nourished the Honduran agricultural base administered by indigenous and campesino communities and are now under the ownership of foreign companies, including Chinese companies.

Israel’s construction of its “security barrier” in the West Bank did not follow the demarcations of the “Green Line” which supposedly designated Israeli/Palestinian borders. Instead, the wall was intentionally constructed to confiscate and claim fresh water sources within the West Bank to be used by Israeli settlements and Israeli society in general. In 2009, Israel experienced an intensification of its drought and implemented cutbacks; now, Israel touts one of the most comprehensive water recycling and desalination technologies in the world. It “offers” to sell this water to Palestinians in the West Bank and others, just as it continues to destroy any remaining water infrastructure in Gaza or allows settlers to destroy what remains of Palestinian agriculture.

With this record of “progress” in coordination with strategic partnerships, one cannot help but wonder at the correlation between these meetings and the Obama administration’s proposals for its Clean Power program. Statistics and projections promise savings and decreases in consumption, but what is the actual cost and who profits? What is lost in these stories of technological achievement are that they came at the cost of an entire society’s way of life and means of survival, alongside and in coordination with technologies that suppress dissent and freedom of expression and that profit from the criminalization of conscientious communities and individuals.

Despite these setbacks, the spirit and praxis of resistance has endured. In the course of confronting these schemes, movements have fortified their resolve and expanded their capacities to create and sustain networks and alternatives to the current systems that are ultimately unsustainable. The consciousness of the masses of people in all three countries are beginning to see through the illusory contrivance of “progress” as they recognize their own plights in the stories coming to light about the conditions of their neighbors and family members near and far. As the current political and economic elite attempt to salvage structures built upon foundations of corruption and deception, the integrity of those who have persisted in their struggles will provide the keystone to an emergent leadership that will redefine methods of local and global social and economic cooperation and respect for the Earth.

Charity Crouse is a long-time activist and journalist currently existing in California. She lived in Chicago for 13 years, during which she covered a number of political and economic issues as the editor of StreetWise newspaper. She has traveled to the Middle East several times and recently returned from six months in Honduras.