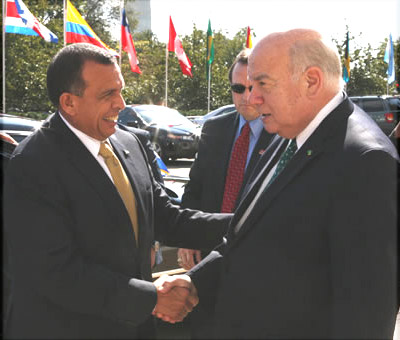 President Porfirio Lobo Sosa met privately in Washington DC, with the Secretary General of the Organization of American States (OAS), Jose Miguel Insulza. Both dignitaries discussed issues of strengthening and the defense of Honduran and American democracy.

President Lobo then held a hearing with the chairman of the OAS Permanent Council and Permanent Representative of Guyana, Bayney Karran and the Secretary General of the hemispheric forum, Albert Ramdin, who expressed their satisfaction at the return of Honduras to the OAS.

President Lobo Sosa and Mr. Insulza signed five important agreements of cooperation. The agreements referred to the fight against arms trafficking and drugs, the generation of biofuels, and the promotion of peace.

In a ceremony acknowledging the signing of these agreements, President Lobo Sosa was accompanied by the Private Secretary to the Minister Reinaldo Sánchez, and the Secretaries of Foreign Affairs, Arturo Corrales; Safety, Pompeyo Bonilla; Justice and Human Rights, Ana Pineda; and Indigenous and Afro-Honduran, Luis Green, and Deputy Defense Minister, Carlos Funes.