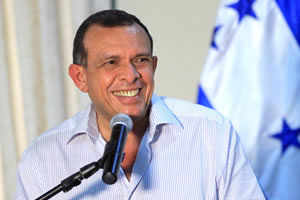 President Porfirio Lobo Sosa held a press conference at the Presidential House to report on the events which took place at the Sixth Summit of the Americas that was held from the 14th to 15th of April in the city of Cartagena de Indias, Colombia. 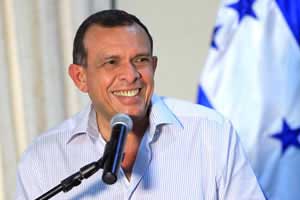 The President of Honduras said the conference was “a success” because they were able to reach an important consensus on the issues of combating organized drugs and weapons distribution in the region.

President Lobo did, however, say there was no consensus on some other important issues, such as the participation of Cuba in hemispheric summits, and the dispute over las Islas Malvinas (the Falkland Islands), between Argentina and the United Kingdom.

The President reported that in the private meeting between presidents and ministers, the main topic was drug trafficking and organized crime, and debates surrounding the decriminalization of drugs. “In terms of every president, the issue of the decriminalization of drugs is off the agenda,” he said. The group agreed to hold technical and scientific studies to see what measures might be more effective in fighting organized crime and drug trafficking.

President Lobo said he introduced, in the presence of the U.S.A. President Barack Obama, the issue of migrants looking for an opportunity in that country.

“I expressed to President Obama about the possibility of seeking measures that will benefit our people, recognizing that they were not there because they wanted to be, but because they are displaced by poverty, and in search of a place to improve their families,” he said.

Additionally, one of the main themes of the summit was the debate of shared responsibility, and shared, but different approaches by the regions. Both demand that commitments are made on the subjects, in particular, of respect for human rights, and domestic and international law, he said.

He said he also spoke with other leaders about the need to lower poverty rates. They discussed the generation of income by taxing those citizens making the most, and implementing measures to combat corruption, so that the funds go to the poor.

The President reported that other issues addressed by the presidents at the summit were: integration of physical infrastructure in the Americas, poverty, inequality and inequity, disaster risk reduction, access to and use of, information technology and communications, public safety, and transnational organized crime.

The President of Honduras thanked the people of Cartagena and the Colombian President Juan Manuel Santos, for the attention and affection, and said that the Sixth Summit of the Americas was a success.