El Niño rains could limit shipments of offshore melons to the U.S. this season. 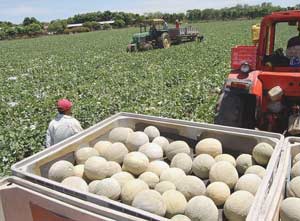 Central American expects to begin sourcing honeydews and cantaloupes from Honduras and watermelons from Guatemala about Dec. 17, Warren said.

“It’s a typical start. Normally the market starts pretty good, and we expect it to be decent this year.”

Prices may not, however, be as high as they were at the end of November, Warren said.

One-half cartons of cantaloupes 9s from Guatemala were $18 on the Miami terminal market, comparable to last year.

Prices were very low at the end of the domestic season, then very high at the start of the offshore deals due to the rain and also lower acreage, said Barry Zwillinger, owner of Legend Produce, Dos Palos, Calif.

If the rain stops, markets could return to more normal levels by mid December, Zwillinger said.

Legend wrapped up its domestic production the week of Nov. 23 and was importing cantaloupes and honeydews from both Honduras and Guatemala by early December.

Legend also is sourcing canarys and galias from Honduras this season.

The company expects to bring in Guatemalan melons through mid- to late January and Honduran melons through the first week of May, when it should kick off its first domestic deal of the season, in Brawley, Calif., Zwillinger said.

Guatemala and Honduras both have had more rain this season related to the big El Nino, but as of Nov. 30, quality was good, Warren said.

“At this point it’s under control, but it depends on what happens with the weather.”

In addition to honeydews and cantaloupes, Central American will source a small number of galia melons from Honduras this season, Warren said.

The company also was experimenting with some new cantaloupe varieties in its offshore deal this year.