San Pedro Sula, Honduras. The construction of storm drains for the collection of rain water from 27th street, has been steadily advancing, and will be completed in February of next year, according to Engineer Luis Zaa, Chief of the Rain Water Unit of the Superintendent of Public Works.

Rain water from the upper part of the city will be captured and redirected to storm drains in order to avoid problems to the roadways caused by heavy rains in the 27th Street area and the neighborhoods of Pradera, Perpetuo Socorro, San Vicente de Paúl, Callejas, Celéo Gonzales, and Felipe Zelaya. The project is valued at 10 million lempiras. 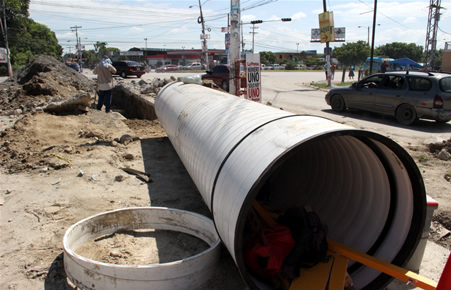 The implementation of this project has, and will, include topographic analysis, the collection of field data, the installation of thermoplastic pipes, the construction of concrete lined canals, re-channeling to the rió Blanco, the cleaning of gutters, and the relocation of electrical lighting in all affected areas.

Engineer Zaa relayed that the construction of these rainwater collectors in the 27th Street areas will benefit approximately 20 neighborhoods, whose roadways have been, for many years, affected by the floods, and will resolve many major problems there.

Luis Enrique Zaa has asked the residents of the neighborhoods benefiting from this project, namely, La Trinidad, Callejas, Filadelfia, Felipe Zelaya, Brisas del Sauce, Calpules, José Manuel Arriaga, Santa Venencia, El Hogar, Cristo Viene, and Rivera Hernández, to accommodate the realization of this project in order to solve the problem of flooding that afflicts them during the rainy season. He has asked the general public of San Pedro Sula, and particularly, drivers of these important arteries to be understanding and take alternate routes.