South Korea will provide Honduras and Guatemala with $550,000 in humanitarian aid as the countries are troubled by frequent disasters caused by climate change, the Foreign Ministry announced Tuesday. 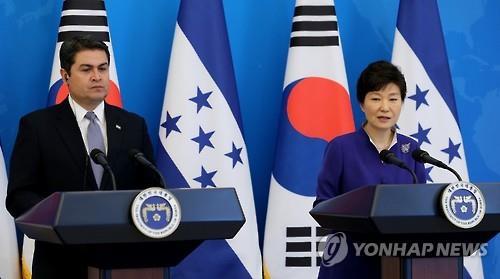 The government has decided to offer $300,000 to Honduras, which is reeling from the worst drought in half a century. Around 13 million people, 15 percent of the nation’s population, are facing a food crisis.

South Korea will also deliver humanitarian assistance worth $250,000 to Guatemala, which is also suffering huge damage from climate change.

Honduras and Guatemala are among the nations most susceptible to climate change.

Seoul’s announcement of the aid came after the international deal on climate change signed in Paris over the weekend.

South Korea has provided nine other countries with a total of $2.1 million in related humanitarian aid this year alone.

“Our government plans to actively implement ‘humanitarian diplomacy,’ making efforts to expand humanitarian assistance for emergency disasters from climate change as well as drawn-out conflicts including those in Syria and Iraq,” stated the South Korean ministry.