Residents of Siguatepeque got to witness an extremely surprising occurrence earlier today: a tornado!

Tornadoes are not at all common in Honduras, and due to this it wasn’t expected,  causing panic among some of the individuals who were in the area to witness it.

Astonishingly enough according to local first-responders the tornado apparently didn’t cause any damage to people or to property (it’s possible that it didn’t touch down, but I’ve been unable to confirm whether or not it did. If it didn’t it’s a funnel cloud and not a tornado). It would appear, as if a tornado in Honduras wasn’t weird enough, the tornado also miraculously didn’t harm anyone or anything and thus the only “damage” might have been inhabitants of the area being frightened.  It did cause a commotion but due to the commotion residents managed to capture the tornado in the sky on video which has since then been uploaded to multiple sources including YouTube and Facebook.

The following link is the video mentioned above: https://www.facebook.com/HondurasisGreat/videos/645510305590939/ 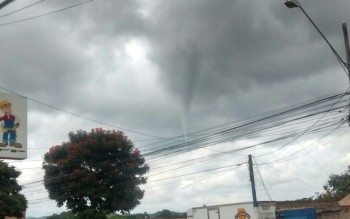 Photo of the tornado, source: http://www.tiempo.hn/pequeno-tornado-registrado-en-siguatepeque-no-causa-danos/