Six members of Congress on Thursday urged the U.S. Agency for International Development to fund LGBT advocacy efforts in Central America. U.S. Reps. Eliot Engel (D-N.Y.), Ileana Ros-Lehtinen (R-Fla.), Albio Sires (D-N.J.), Richard Hanna (R-N.Y.), David Cicilline (D-R.I.) and Chris Gibson (R-N.Y.) in a letter to Acting USAID Administrator Alfonso Lenhardt asked the agency to specifically use funds from the Central America Regional Security Initiative to support advocacy groups in Guatemala, El Salvador and Honduras. The lawmakers note that LGBT violence remains pervasive in the three countries. Their letter refers to a Honduran television station that broadcast a video showing police in the city of San Pedro Sula “brutally” beating a transgender woman. Nearly 200 LGBT Hondurans were reported killed between a 2009 coup that toppled then-President Manuel Zelaya and May 2014. Nelson Arambú, a Honduran LGBT rights advocate who passed away earlier this year, told the Washington Blade last fall he was nearly kidnapped near his home in the country’s capital of Tegucigalpa. 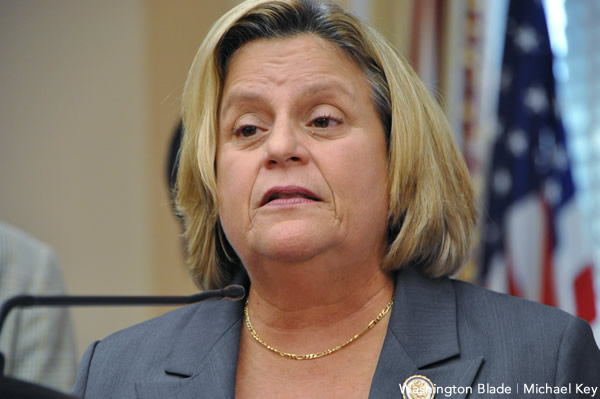 U.S. Rep. Ileana Ros-Lehtinen (R-Fla.) is among the members of Congress who have urged the U.S. Agency for International Development to fund LGBT advocacy efforts in Guatemala, El Salvador and Honduras.
(Blade file photo by Michael Key).

The letter the members of Congress sent to Lenhardt also cites the case of the Guatemalan Public Ministry refusing to investigate a lesbian woman’s allegations of domestic violence against her partner because the agency said “domestic violence only applied to heterosexual couples.” It notes the same authority would not investigate the assault of a “gay and drunk” man who lost an eye until a human rights organization intervened.

The letter also cites a State Department report that notes LGBT people in El Salvador face “violence along with harassment when applying for identification cards.”

“We all share the goal of wanting a more secure Northern Triangle region,” wrote the lawmakers, referring to the area in which the three countries are located. “In order to meet this goal, we must do much more to protect the sub-region’s must vulnerable populations, including the LGBT community. We urge you to provide funding to organizations in Honduras, Guatemala and El Salvador that will help us to reach this goal.”

Annette Aulton, a spokesperson for USAID, told the Blade that “LGBTI issues are integrated throughout our programming in Central America.” These include an initiative funded by the President’s Emergency Plan for AIDS Relief that has distributed information on HIV testing, condom use and other safer-sex practices to more than 7,000 gay and bisexual men in the region.

“We will continue to emphasize non-discrimination and inclusion of LGBTI persons in scaling up projects and new programming that will take place with the increased funding,” said Aulton.

“It is really encouraging that these legislators are considering this,” he said.

Indyra Mendoza, general coordinator of Cattrachas, a Honduran LGBT advocacy group, told the Blade in a statement she feels the funding should be used to audit a unit of the country’s police charged with investigating crimes against LGBT people and other vulnerable groups.

She noted the group — which formed in 2011 with the backing of the U.S. government — has proven ineffective.

Sergio Moncada, a former Honduran diplomat who works with two LGBT advocacy groups in the Central American country, applauded Engel and the five other members of Congress who wrote to Lenhardt for “demanding that the Obama administration pay closer attention to the staggering violence against LGBT Hondurans.”

He nevertheless echoed some of Mendoza’s concerns.

“The efficacy of the funding that Congressman Engel proposes, however well intentioned, is not clear without a cleanup of the Honduran police and a rollback of the military, institutions that the Obama administration funds and props up despite their terrifying record of human rights abuses, including attacks against Honduran LGBTs,” Moncada told the Blade.