Who Wants to Buy Honduras? 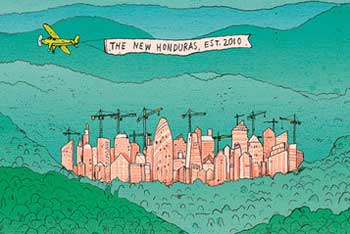 “Romer, who is expected to be chairman, is hoping to build a city that can accommodate 10 million people, which is 2 million more than the current population of Honduras. His charter city will have extremely open immigration policies to attract foreign workers from all over. It will also tactically dissuade some from coming. Singapore, Romer said, provides a good (if sometimes overzealous) model. Its strict penalties for things like not flushing a public toilet may make for late-night jokes, but they signal to potential immigrants that it is a great place if you want to work hard and play by the rules.“

“There will be many rules in Romer’s charter city too. Even though he expects most initial opportunities will be fairly low-paying basic industrial jobs, the local government will mandate policies that ensure retirement savings, health care and education. According to Romer’s plan, the immigrants who arrive will not get rich, but their children will eventually be ready to climb the economic-development ladder.”