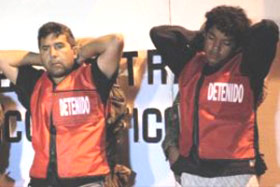 The capture of two former Honduran soldiers accused of training Mexican drug cartel the Zetas suggests that the gang is expanding its ties to ex-military personnel in Central America.

The two Hondurans, Roger Ivan Lopez Davila, 41, and Carlos Alfredo Herrera Gomez, 21 (pictured), had been in Mexico for two years and had allegedly conducted weapons training for the Zetas in the northern state of Nuevo Leon, a military official told newswire EFE.

Seven others, among them five minors aged 14 to 17 years old, were arrested with the two men 30 miles east of the state capital, Monterrey.