Honduran soldiers are taking over public hospitals and medicine storage warehouses to guarantee the supply of drugs to patients after a recent fraud and graft scandal rocked the Social Security Institute.

Honduran armed forces seized public hospitals and warehouses that stored medicine on Wednesday after a recent corruption scandal involving the country’s “IHSS” (Health and Social Services Institute) prompted them to take measures to ensure that patients had access to drugs. 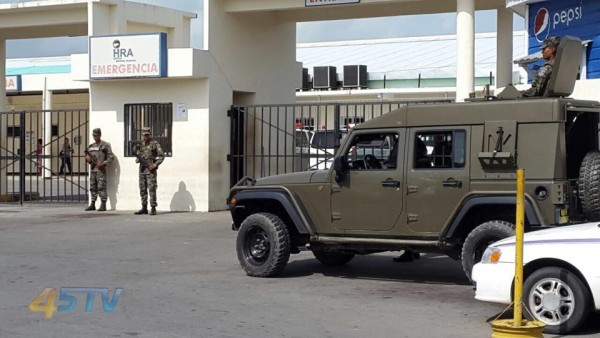 Honduras’ army on Wednesday seized control of several medical supply centers amid an ongoing graft scandal.
Initial Hearings are underway for those accused of corruption in the Honduran Health Services Department.
Interpol Alerts have been issued for some accused that have not been captured nor voluntarily presented themselves.
Protests over corruption in the Government continue to grow throughout the Country of Honduras.
Protests calling for the President to resign continue to gain steam.
Photo Courtesy: 45TV El Canal de Los Ceibeños

President Juan Orlando Hernandez said that the army would conduct an inventory check to ensure that there are no drug shortages. It will then identify the producers and providers capable of guaranteeing the quality and distribution of the medical products.

Honduras President Juan Orlando Hernandez also said he would take steps toward “disbanding the mafias that have controlled the system of storage, distribution, delivery and acquisition of medicines”.

Hernandez’s administration is embroiled in a scandal where his political party allegedly used $90 million, belonging to the country’s Social Security Institute, as campaign funds. Hernandez has reportedly denied the allegations.

Honduran prosecutors are investigating the misappropriation of up to $300 million from the Social Security Institute that might be related to Hernandez’s National Party or other political organizations.

The corruption charges, along with Hernandez’s decision to strike down the presidential term limit, have led to weeks of protests, organized by the opposition Libre and Reform Political Party (Libre).

The president announced that he would begin a major anti-corruption crackdown in the country that would target “the criminal and the corrupt,” but did not provide details.

The announcement came a day after Roberto Ramirez, a prosecutor who was investigating the Social Security scandal, reportedly left the country due to “highly” credible threats to his life.

The social security scandal involves alleged embezzlement that cost the institute as much as $120 million.  At least some of the money went to finance governing party political campaigns, including Hernandez’s.
News Tags: