Last week, the Honduran National Coalition of Environmental Networks and Organizations (CONROA by its initials in Spanish) protested a World Bank-sponsored “Conference on Sustainable Development of Natural Resources” in Tegucigalpa. 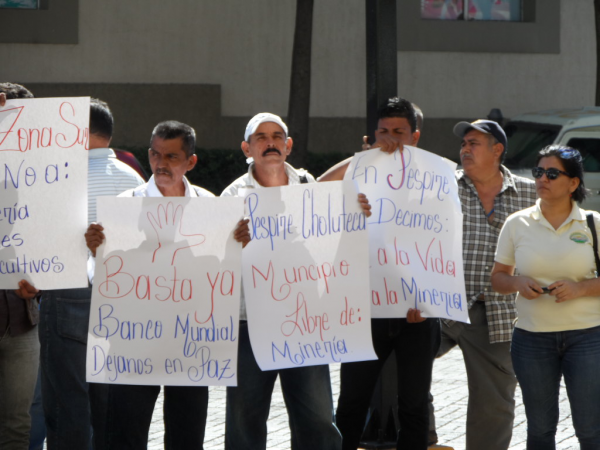 CONROA urged the Bank – and the Honduran government – to support coffee farmers instead of national and transnational mining companies, stating that that farming creates more jobs, income and better distribution of wealth without the long-lasting environmental impacts, public health problems and social conflict that mining generates.

They also demanded that community consultation be made binding before any mining activities take place on community territory, meaning before mineral prospection or exploration activities are approved. The current mining law – passed in January 2013 with technical support paid for with Canadian overseas development aid – only makes provisions for non-binding community consultation at a late stage, just before projects get final approval to go into operation. At this stage, if the results of community consultation are taken seriously at all, the Honduran state could be left open to foreign companies suing the country under the provisions of trade pacts, such as the Canada Honduras Free Trade Agreement, if they make a decision that a company doesn’t like.

The dirty legacy of Canadian companies such as Goldcorp and its San Martín mine in the Honduran Siria Valley continue to be a reference point for many municipalities in Honduras that are declaring their territories free of mining, despite the risk they run of being threatened and even killed when they do so.

(Tegucigalpa) In the context of the “Conference on Sustainable Development of Natural Resources,” February 3-4, 2014, in the Hotel Intercontinental, Tegucigalpa, Honduras hosted by the World Bank Group and the Honduran Government, in particular the Honduran Institute for Geology and Mines (INHGEOMIN), the National Coalition of Environmental Networks and Organizations (CONROA by its initials in Spanish) makes the following declaration:

According to INHGEOMIN, there are currently 487 mining oncessions that have been granted to mining companies, 146 of which are for metallic mining and 114 of these which are for the extraction stage of mining. They are located in 14 of 18 departments around the country, especially in Santa Barbara, Olancho, Francisco Morazán, Comayagua and El Paraíso. Another 140 non-metallic concessions for extraction have been granted, which include iron ore operations, revealing a tremendous paradox: Only in Honduras is iron not a metal!

All of these metallic and non-metallic concessions pose a threat to the environment and public health in hundreds of communities. For this reason, communities are protesting more and more in defence of their human rights, including for the right to health, nutrition, and water, or in other words, life, wanting these to prevail over the business interests of a handful of people and national and international companies.

It has been clearly demonstrated to Hondurans that mining, especially metallic mining, kills both people and other living things given the toxicity of related contamination and the use of heavy metals like cyanide, arsenic and mercury. Communities in the Siria Valley in the department of Francisco Morazán are witnesses to this hell and as a result, many municipalities are saying no to mining.

As a result of their protests, human rights defenders and those who defend their territories are being pursued, denying them the right to say no in their municipalities. The government of Juan Orlando Hernández (JOH) and complicit municipal corporations continue to rent and sell off Honduran territory come what may and refuse to make community consultations binding.

As we have said many times before, the current mining law does not serve to regulate mining and its use, rather it puts communities at a disadvantage given that community consultations are not binding before prospection and exploration activities take place, that is before there commitments are made between the state and transnational companies.

Far from protecting mining-affected communities, the mining law puts them at a disadvantage compared to the freedom with which companies operate, with protections from the Honduran state to ensure that they can “invest” in the country.

A recent study demonstrates that the mining industry displaces other productive activities such as coffee farming in Honduras. This study shows that, although coffee farming uses nearly the same surface area in Honduras (2.17%) as mining (2.85%) that it creates more jobs, income, and distribution of wealth. So then, why would the World Bank and the state not support the more than 120,000 coffee farmers whose crops were seriously affected by a plague and who were abandoned by the state? Instead, they support an industry that has created social conflict as a result of how mining competes for space, water and territorial control, etc.

Mining has not contributed to development in any country, given that the income and few jobs that this activity generates do not compensate for the environmental and social impacts.

For all these reasons, CONROA opposes the event hosted by the World Bank, INGEOMIN and the government of JOH to promote an activity that has not only provoked environmental damage, but also social conflict and displacement of Honduran communities from their legitimate territory.

We demand that the Honduran state fulfil its responsibility and that Honduras’ natural commons, including the territory, is debated in inclusive spaces where communities themselves can express their point of view, given that at the end of the day it is they who will suffer the consequences of extractivism that state administrators are promoting as if it were a great panacea for national development at the cost of the impoverishment and death of Hondurans.

No to mining in Honduras

See: 839 New Mining Projects Are About To Launch in Honduras