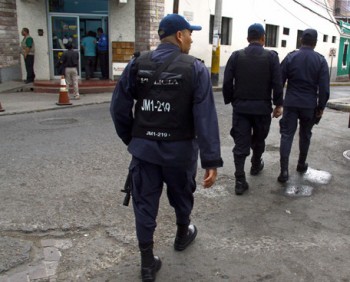 Security Minister Arturo Corrales issued a statement today alerting the public that from this day forward, personnel of the National Directorate of Criminal Investigation (DNIC) in the country are suspended; the purpose being “to seek certification and improvement of the National Police.”   The move, allegedly, was intended to make all DNIC personnel available, by relieving them of their responsibilities, so they could concentrate on the certification process and confidence testing that will take place.

According to the President of the Chamber of Commerce and Industries of Cortes (CCIC), Fernando Jaar, however, Security Minister Arturo Corrales confided to business owners that the determination to terminate and certify DNIC staff was due to the discovery that they were leaking information to organized crime.

Jaar asserted that the Honduras DNIC is being closed at the national level, “since it was their offices filtering information of organized and common crimes, and they were planning criminal acts from the offices”.

He added that, “we believe that the closure of the DNIC is the right thing.”

The CCIC President said the Minister of Security assured employers that the agency has been involved for a few weeks, and they have found results, “eminent and timely because from the beginning we began to see direct links in DNIC offices.”

The Honduras DNIC suspension will be in effect until further notice.

This is not the first time the DNIC has been accused of participating in crime.  Honduran Police Officers Accused of Crimes, was published in September of 2011.