HONDURAS HAS QUALIFIED TO PARTICIPATE IN THE 2014 WORLD CUP IN BRAZIL!!!

The Honduras National Football Team arrived Sunday evening in Kingston, Jamaica, where they plan to seal the deal with their qualification for the World Cup Brazil 2014.  Honduras vs Jamaica is set for Tuesday, October 15, 2013 – the final day of the final round of CONCACAF. 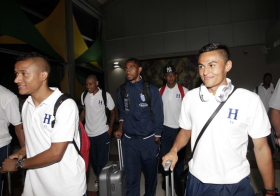 The Honduras National Football Team was greeted by fans on Sunday.

A group of fans were on hand to say goodbye to La Selección with cheers and good wishes for their trip to Jamaica. Immediately after exiting the bus that drove the team from their hotel at the airport, players and coaches received countless expressions of affection from the Honduran fans who expect a win, and classification, in the Caribbean.

Hondurans were celebrating all weekend after the BiColor’s defeat of Costa Rica on Friday night, October 11th, and are now looking forward to Tuesday’s game.

“We know it will be a tough game,” said Carlo Costly, who mentioned they’ve watched videos of Jamaica matches to prepare. He expressed that he was motivated and eager to be one step closer to his goal: Brazil 2014. “It all depends on the marvelous group with which I have been living all this time; the only thing left is to play like we have been doing, put the knife between our teeth, and be good in the game,” he added, “Unity is strength.”

Costly was in awe of the possibility of qualifying, and said the team is motivated in all aspects, and filled with humility, knowing that they are close to another world cup.