Life For Young People in the Northern Triangle

Insecurity due to gang activity and repressive actions by authorities in Honduras, Guatemala, and El Salvador, have caused young people to adapt a live of seclusion, without diversions, and without opportunities, to avoid the violence.

The Northern Triangle has 6.5 million young people between 15-24 (21.6% of the population), where each day they make vital decisions that relate to how they survive in the most dangerous non-war region in the world.

How they dress, what shoes are used, the most appropriate haircuts, what are the safest areas to visit, what streets to use, are daily decisions that are absolutely vital.

“It’s crazy. Shoes with specific marks can’t be used, because gangs use those shoes and you could be mistaken for a gang member.” Says Mauricio Cornejo (18 years old), as he walked down a contested street where the MS-13 and the 18th street gang fight. 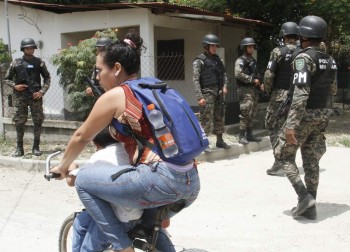 The Panorama is similar in other Honduran cities. “You can’t use a hat with the visor flat, backwards, or to the sides, the shirts can’t be loose or too exact, if you walk like one of them they’ll detain you to interrogate you.” Says Arnulfo, 22 years old, who lives in La Sosa, in the West of Tegucigalpa.

“A young person or teenage now has to watch where they step, they need to know who runs where, otherwise they risk their lives.” Warns Silvia Bonilla, president of the Legal Women Foundation who lives the program “Construyamos Conciencia” in schools and jails for minors in San Salvador.

In the entrenched battle between gangs for control of land, hundreds of young people have died, many of them innocent but mistaken for gang members, or because they came across gangs in dispute.

The Northern Triangle, according to forensic statistics, closed 2014 with some 15,802 homicides, and is closing in on that number this year with some 4,281 homicides in Guatemala from January to September, 4,942 in El Salvador, and 2,628 in Honduras in the first semester.

More than 50% of the victims in all three countries, are people younger than 25.

This fratricidal fight is to “maintain the power in certain territories and to do that they are willing to use deadly force, through assisinations, and even dismembering their rivals.” Reflects the ex-vice-minister of the Interior of Guatemala, Mario Merida.

The esclation of violence reflects the “failure of the Iron Hand policies”, states Carolina Orellana of the Central American Coalition to prevent violence, which is made up of more than 30 NGOs throughout the three countries.

“For young people in Guatemala, these spaces are complicated because we don’t have free transit, we cannot move as we please, from street to street.” Warns Viviana Soto, who is 29 years old and works with support programs for young people through the Fundacion Demos.

Additionally “We can’t head to the Plaza, or the ball courts because at any moment the gangs could confront us or each other, so our recreation is inside of the house with video-games, if we have them.” Comments Humberto Garcia, a college student who is 21 years old in the populous community of Lourdes, just 20 KM to the East of San Salvador.

To replenish their ranks, the gangs have recruited many young men and young women, including kids as young as 8 who were assigned the duties of being informants, and messengers, or collectors of extortion.

According to the Criminologist from Guatemala, Danilo Parienllo, the gangs select children and young people because they are “nonpunishable” or get shorter sentences, but in the correctional centers for young people they turn into a new and bigger problem because many times they are “trained to keep on committing crimes.”

Young people have difficulty finding work and when they do they are often required to prove they don’t have a criminal record.

“The violence has a grave impact on work opportunities (of young people)” says Daniela Trucco of the economic commission for Latin America.

Trucco is the author of the book “Juventud; realidades y retos para un desarrollo con igualdad” which she presented in the Salvadorian capital.

The Investigation determined that a large part of the 11.3 million young people in Central America and the Dominican Republic (19.8% of the total population) is marginalized via education and work opportunities.

“The young people are our present. They can avoid violence if we construct productive alternatives with the help of international cooperation.” Says Carlos Navarro, coordinator of a program in Honduras that works to get students to assist during their free-time with farming.

*This is a translation of an article from La Prensa, the Source is: http://www.laprensa.hn/honduras/895794-410/hondure%C3%B1os-cambian-su-estilo-de-vida-por-la-violencia*