Syrians Detained in Honduras Paid $10,000 Each in Quest for Asylum

The five Syrians paid smugglers $10,000 each to travel through multiple countries before being detained for carrying false Greek documents in Honduras, their epic journey exposing a little-known southern smuggling route for Syrians fleeing war in their homeland. 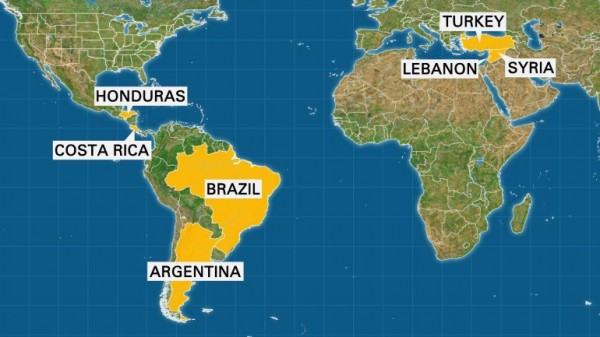 Honduran police Wednesday said they detained five Syrian men who traveled with fake passports to the Central American country’s capital. Before the men had arrived, they had traveled to Lebanon, Turkey, Brazil, Argentina and Costa Rica.

A sixth man was turned away from Honduras on Friday upon arrival by plane from El Salvador, and was sent back. In Paraguay, police detained a seventh Syrian man who was traveling on a stolen Greek passport. The Syrian detained in Paraguay was caught because his fake passport was missing some of the vaccinations required.

The young men detained in Honduras have told human rights activists their final destination was next-door Guatemala, because their Turkish people smuggler who guided them through the unfamiliar continent told them they had jobs and a house waiting for them there.

However, relatives of one of the men, Laurans Samaan, said the 19-year-old was trying to reach his brother in the United States and find work. Samaan, they said, is a Syrian Christian from a village near the city of Homs, one of the hardest hit in the war. Two more of the men have Christian names.

So far appear to have no known connection to terrorism and were seeking jobs in nearby Guatemala, and one wished to reunite with his brother in the U.S.

The five were part of a wider group of seven Syrian nationals who acquired forged passports in Brazil (The passports had been doctored to replace the photographs with those of the Syrians) and then went by land to Argentina on their way north, a U.S. government source familiar with the case said. The source also said there was no evidence to suggest the men were militants.

They took advantage of the porous Triple Frontier near well-traveled tourist destination Iguazu Falls where Brazil, Argentina and Paraguay meet, the source said. The three countries belong to the Mercosur customs bloc, where you can cross borders with simple identity documents rather than passports.

“They probably spent the majority of their time in Brazil, because that’s where they got the documents. They made their way from Brazil through Argentina pretty quickly,” the U.S. government source told the press. “There’s a human smuggling cell that is moving people through the region.”